We have years of experience caring for families from all walks of life, cultures and faiths. Our unsurpassed staff and our family provide kind, caring, professional service. Each family comes to us because they know we are leaders in our profession who are dedicated to excellence in service, adhere to the highest funeral industry standards, and have exceptional integrity. We consistently earn phenomenally high customer satisfaction survey results.

Our licensed, professional staff is here for you 24 hours a day, 7 days a week. Please call 405-794-7600 anytime. We will even come to you to make arrangements in the comfort of your home.

Prompt, compassionate service is always just a phone call away, where and when you need it.

Laci is a lifelong resident of Oklahoma and was raised in Edmond. She graduated in 2014 from the University of Central Oklahoma earning a Bachelor’s Degree in Funeral Service with a minor in Grief. She hopes to bring comfort and exhibit compassion to every family who has entrusted her with the care of their loved one.

Laci feels very passionate about her work with the March of Dimes and advocating for premature babies. Currently residing in Oklahoma City, Laci attends Life Church and has a blessing of a daughter named Betsy.

One of Laci’s favorite activities is attending OKC Thunder games. She loves boston terriers, Dr. Phil and is a die-hard Kevin Bacon fanatic. Her favorite motto is, “Be yourself; everyone else is already taken.” 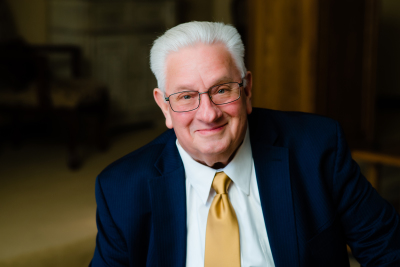 Since that time he has been employed with some of the cities leading funeral homes as funeral director, embalmer and funeral home manager.   He has served as District Chairman of Oklahoma Funeral Directors Association, Chairman of the Ambassadors Committee of the South OKC Chamber of Commerce, participated in Arts Festival Oklahoma, was member of Crossroads Cathedral and later served as lay speaker and as Local Pastor of Capitol Hill United Methodist Church.

Harold is now semi-retired and serves as an Ambassador, Funeral Celebrant and Funeral Director.

Harold is married to Karen Marsee - Branstetter, who is a retired piano teacher and former employee of music departments at Moore Public Schools.

Brenda Roberts is a blessing and an immense talent for our team.   She brings years of grace, professionalism, leadership and a willingness to serve for her community to our team.   Brenda began her ambassadorship with Moore Funeral and Cremation in February 2014.

She is originally from Virginia, but in March 1973, she married David Roberts of Oklahoma City. In August 1983, they moved to Moore, Oklahoma, where they have lived and have become very active in community activities.

Brenda began her civil service career at Fort Lee, Virginia. She transferred to Tinker Air Force Base in March 1973, continuing her civil service career primarily in civilian personnel functions.  Her final assignment was as the Civilian Personnel Liaison for the 552nd Air Control Wing, a position she served in for 10 years. In 1997, she retired, having served 34 years with the government. In 2003, she became the Executive Director of the Moore Chamber of Commerce; later her title was changed to President/CEO. She served in this position for 10 years, retiring in December 2013.

Her desire to serve others has offered her many opportunities in Moore and the surrounding
communities.

Jim Esmon is an asset of warmth, calmness, and a servant's heart for our team and community.

Jim has been an ambassador at Moore Funeral and Cremation since 2013. He has lived in the Moore area for over 50 years.

The loss of his own son has inspired Jim to help people in their greatest time of need. We consider ourselves lucky to have such an amazing person on our team.

Leandra Aragon provides our team and community with a servant's heart.   She is always looking for ways to serve and make our community better.  Her willingness to actively engage in support for other team members and the community is a blessing.

Leandra began her ambassadorship with Moore Funeral and Cremation in April of 2018.

With a history of a wide variety of work from welding, mason and tile work to pharmacy and most recently with the University of Oklahoma, she draws on her previous experiences and leadership roles to work with and help all walks of life. Creative and innovative, she strives to make even the simplest of moments memorable.

Her own personal experiences have driven her to seek to help others in their own times of need and lend a helping hand and listening ear.

Antonieta Trent offers compassion, sincerity, and is a peaceful presence for our team and the community.

Antonieta is fluent in Spanish and English; she assists with translation of documents, interpreting for family support services, and assists with obtaining an Apostille for transport out of the country.   Her ability to offer grace through the stress of a language barrier is never overlooked.

Antonieta has been an Ambassador for Moore Funeral and Cremation since October 2018. Jessica is a native Texas Girl! She was born and raised in McKinney, Texas.  Jessica relocated and joined the Moore Funeral & Cremation team fall of 2019; she has been in the funeral business over nine years. Jessica began her mission with Turrentine-Jackson-Morrow Funeral Home in McKinney. There she learned the value of professional funeral etiquette; and when you embrace this profession it becomes a ministry, not a job.

Jessica provides office management and funeral directors assistance to allow families a professional and sincere experience with us. In this business, we have “one” chance to make it right for the family.  Therefore, she uses her personal experiences of loss to assist each family.

She looks forward to becoming a part of the Moore community as she was in McKinney by serving the McKinney Education Foundation, McKinney Chamber, McKinney ISD committees, LULAC and other community groups and events.

Jessica enjoys “the game” whether it be watching her nephew-in-law Mr. O play baseball, her son umpiring professionally or her daughter-in-law playing professionally and coaching, you can always find her at the field.

You are welcome to call us any time of the day, any day of the week, for immediate assistance. Or, visit our funeral home in person at your convenience.